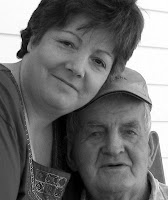 Even in antiquity, bread was considered so essential to the maintenance of human life that there was no act more social than sharing one's bread with others.
–excerpt from Breaking Bread by Daniel Rogov

My father was a rugged man who loved the outdoors. He worked as long as day gave light. He worked a small farm when we were growing up--a few pigs, chickens, and cows--enough to feed his family and a bit more. He worked as a lumberman, but mostly he worked acres of wild blueberries. For enjoyment he planted and tended flowers. His big weathered hands contradicted the delicate nature of the flowers he coaxed into beauty.

He was a good cook and in later years as he worked less in the winter, he would help Mom with the meals. She appreciated it as it gave her more time with her passion—quilting. When he wanted to learn to make bread, she told him no. That was her department. We all, including Dad, found that amusing as Mom never balked at much. We were never sure if it was because she wanted this one thing that was hers---or she was concerned about the mess the kitchen would be in when he was done.

My father was an enthusiastic cook and the cupboard doors often told splattered tales of homemade fudge and tenderized steak. Also, his bachelor days were dotted with stories of kitchen slap-dashery and perhaps she was recalling these. Dad teased Mom about putting her foot down, but respected her wishes. It remained Mom’s department.

When Mom passed suddenly we were all devastated, no one more than Dad. We helped each other through, but as we each had a unique relationship with Mom, there was a part we would all have walked alone—but for God. Dad’s journey, being married to Mom for 48 years, was to be the hardest.

There was no hiding his grief, but he didn’t wallow in it either. He worked as much as he could and found purpose in his days. After short deliberation, he pulled the mixing bowl from the cupboard and asked for guidance in making bread. He had at least two tutors.

When you came to visit—on went the coffee pot, out came the homemade jam and slabs of bread and cheese; Dad never served delicate 'slices' of anything. When you left you often left with a loaf of bread under your arm.

Although my Mother was not the one to teach Dad to make bread she taught those who did. He mastered white bread as well as raisin brown bread. Then he took what he learned and in compassion used it to reach out to those walking a similar journey. Pass the bread please.
Posted by Annie at 17:48