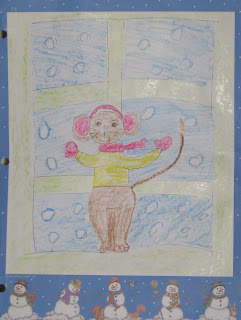 T’was the night before Christmas and all through the house, not a creature was stirring except for a mouse. Hmm...but our story starts before this, actually a few days before Christmas.

Zigfried blew his breath on the frosty window of the vacant farmhouse and rubbed it with his red mitten to make a peephole. Maybe today he thought hopefully. It was only a few days before Christmas and he was watching for a Miracle.

This house needed a family. It had been empty too long.
Zigfried’s tummy growled. “I’ve been empty too long,” he muttered. Jamming his earmuffs on and tossing his scarf over his shoulder, he jumped from the windowsill and grabbed a sack from his home in the bottom of the wood-stove.  He scurried next door to Farmer Mike’s.

Farmer Mike’s Farm had been a haven until the farmer decided he had to take a wife who had to take a cat. Zigfried shuddered. He knew how that song went. He and his buddies used to sit around a campfire late at night down in old Tomcat Hollow and tell cat stories until their little whiskers quivered.

Zigfried looked around casually as he slipped into the barn and whistled nervously as he filled his sack with oats. If he was caught, the wife and her carving knife could be trouble, but he wasn’t worried about Nuisance. That cat was one sardine short of a full can. He smiled smugly. He could out run that bag of fleas any day—on two feet. He was turning to leave when hot breath and a long black whisker tickled his ear.

“Merry Christmas Mouse--will you be joining me for Christmas dinner? Do say yes.” hissed the cat with a lick of her chops.

“Now N-Nuisance,” Zigfried stammered and laughed nervously. He could outrun her, but he had to get out of the corner first. He sucked his stomach in, “You don’t want me. I haven’t been eating too well lately.

Zigfried quickly reached up and yanked hard on Nuisance’ whiskers. While the cat howled he ran under her stomach, grabbed her tail and kept running--in circles. It worked, Nuisance gave chase to her own tail with Zigfried hanging on and staying just out of reach.

After a few rounds Zigfried let go and kept running. He looked back to see the cat still chasing her tail. Zigfried grinned to himself and ran-SMACK-right into the wall. He shook his head, adjusted his earmuffs and scurried away.

The next afternoon Zigfried stood on his windowsill in the vacant house. He munched happily on a pawful of oats as he thought about the news he had just heard. A new family would be moving into the farmhouse soon. His granny would arrive late Christmas Eve to celebrate with him. He hoped that the new family would come before then---the house would be warmer, and Christmas was so much more enjoyable when you could pilfer through someone’s cupboards for your Christmas feast, rather than be hunted while gathering it. He was bellowing his way through “No Place Like Home for the Holidays,” when he heard a low rumble.

Zigfried jumped for joy and wriggled a jig. A big moving van was coming up the driveway. When two laughing children tumbled from the van, Zigfried was beside himself. Children….peanut butter sandwiches…..cheese and crackers, Zigfried’s whiskers trembled and he drooled just thinking about the crumbly possibilities.

The old house came alive the next few days. Zigfried awoke early with the tea kettle singing cheerily on the wood stove. It ended late with the upstairs door swinging softly closed. The lady of the house shopped and filled her cupboards and baked and filled her pantry. At night while the family slept—Zigfried bagged and filled his cupboards. He looked and looked for red gumdrops, but none were to be found—they were his granny’s favorite.

The day before Christmas Zigfried smiled as he leaned against the door to his home, sipping hot chocolate. The children were laughing and talking about what they might get for Christmas.
Skates? A toboggan? A cat?

The smile fell from Zigfried’s face as he leaned closer; he heard the mother say, ‘No, you are not getting a cat’. Zigfried sagged with relief.

“But, the mother continued, ‘Uncle Mike is coming over this morning. He has asked us to take care of his cat. His Mother-in law is coming for Christmas and she is allergic to cats. I said we would be happy to-- it is a small thing to do when he has done so much for us.”

Stunned, Zigfried spewed hot chocolate through his nose---his mouth fell wide open. His whiskers bristled, and when he found his voice, it came out in an indignant squeak.  "HEY!! WHOSE CHRISTMAS MIRACLE IS THIS?

With Nuisance here there would be no ‘Silent Night’ or ‘Peace on Earth’ this Christmas.

Nuisance arrived soon after and her basket was placed next to the stove…..only inches from Zigfried’s door. The two animals spent the day dodging each other---Zigfried dodging Nuisance’ paws---and Nuisance dodging the snapping clothespin Zigfried carried under his arm to defend himself. As he dodged, Zigfried paced and planned. Granny would arrive in a few hours. He worried Nuisance would be the first to greet her.

At ten o’clock Nuisance was put out to do her night business. Zigfried crept from his hole and quickly dropped bits of his precious Christmas feast through the house and up the stairs.

When Nuisance returned, Zigfried watched with satisfaction as the cat took the bait. When the woman went to bed and closed the door to the stairs it was so softly that Zigfried didn’t even hear it.

He added the last few touches to his own Christmas tree and put mulled cider on to warm, he pulled Granny's rocking chair close to the tiny Christmas tree and laid her favorite blanket over it. Sighing with contentment he wandered to his favorite spot on the windowsill of the living room to wait.

It was a clear night with a full moon. The bright silver stars blinked sleepily in the blue velvet sky. Inside, the Christmas tree was decorated with many colored lights.  He peered close to see if anyone could tell where he had been nibbling on the garlands of popcorn and cranberries. Shiny glass ornaments and long silver strands of icicles caught the light, sparkling and dancing with the promise of good things to come. A glass of milk and a plate of sugar cookies and carrots sat on a small table beside the armchair. Zigfried loved sugar cookies. His whiskers trembled but he didn't touch them. He thought those must be for someone special.

He turned his attention to the outside view again, cleared his throat and began to recite in a clear strong voice… “Twas the night before Christmas and all through the house….

Whack! A huge black paw came down on top of Zigfried.
“Not a creature was stirring, especially the mouse,” Said Nuisance as she let out a wicked hiss.

Zigfried pulled--he panicked--he prayed. Surely he wouldn't have to beg. As he struggled to get out from under Nuisance’ paw, he tried to negotiate, "C’mon Nuisance, don’t you feel any Christmas spirit?"

‘Yes’, said Nuisance as she licked her whiskers and held Zigfried firmly with both front paws. ‘What do they call it when you look forward to something—oh, yes, now I remember-- anticipation?  She laughed her wicked laugh again.

Suddenly there was a whoosh and a thud. Both animals were so surprised they tumbled from the windowsill and just stared.  A round shadowy figure crawled from the fireplace. They had heard the stories, but had never been sure they were true.

The figure piled gifts under the tree and filled stockings until they bulged. He sighed and sank heavily into the armchair. He’d had two cookies and was reaching for the third, but patting his belly, he changed his mind. He stood and put the carrots in his pocket.

The animals gulped as the figure came to where they flattened themselves against the wall. He gave Zigfried a beautiful red wagon filled with gifts for him and his Granny. Zigfried noticed right away there were red gumdrops.

‘Merry Christmas, little Zigfried,’ said the figure. With a twinkle in his eye, he scooped up a very quiet Nuisance.   "I’ll see that the door is latched tightly this time.” With a nod and a wink, he laughed a jolly laugh and was gone.

As Zigfried went to greet his granny, he hummed ‘Silent Night’ and nibbled on the last sugar cookie.  As he pulled his shiny new wagon behind him, he wondered briefly what Nuisance would get for Christmas.