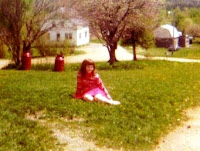 Years ago when I lived in Calgary, I took a writing course for fun. One of our assignments was to write about a day from our childhood, from the view point of the child we had been. All of the elements of this story are true except for the cat named Methuselah. Being from the Maritimes my Mother had some interesting sayings and this story is based on one of them. If we were whiny or bored she would tell us to ‘go mildew’. (I was ten before I realized my mother was affectionately telling me to go mold).

I had been sitting very quietly and patiently in my closet most of the morning, waiting for the faeries to come, but I was tired of that. My legs felt like ginger ale as I climbed out of my secret spot and wandered downstairs to see what Mom was doing.

I expressed my boredom to Mom, as dramatically as any five-year old could. She chuckled and told me to go outside and “mildew”. I didn’t know what she meant, but being an obedient child, I went out to find this mildewing and give it a try.

The morning had been washed bright by the spring rain; the sun and breeze had warmed and dried the small farm to a new freshness. Crisp cotton sheets swayed on the clothesline, teasing dirty little hands to be creative on their blank white canvas.

Methuselah the old tomcat languished from his perch on the windowsill of the woodshed. The chickens were scurrying and fretting as they scratched the dirt for a morsel of grain, or perhaps a lazy worm that lingered from the mornings’ rain. One hen looked weary. I wondered if her battery was wearing out. My brother’s robot looked like that two days after his birthday.

I wiggled under the barbed wire fence and wandered through the meadow. I wondered if the bluettes and violets were poking their bonnets through the lush green grass yet. Dad laughed when I said the petals looked like hats. He doesn’t believe in faeries either.

I meandered to the small red barn nestled snugly into the side hill. A great commotion could be heard from within. I would have to investigate.

I climbed awkwardly over the step and down into the warm barn. The homey smell of hay mingled with the smell of the animals. I walked past the cows, reflectively chewing their cud. I stuck my head around the half wall that separated the hay drop and chickens from the pigpen. Here was the problem. There sat a trio of stressed out hens squawking the blues. They were stranded in the muck and mire of our five little pigs, who watched cautiously from the far corner. The hens could not fly up to the half wall from which they had launched and were too nervous to find another route of escape past the pigs. I didn’t hesitate.....they would have to be rescued.

With my heart beating madly, I climbed over the rails, stretched to step onto the metal food trough and dropped down. I held my breath from the acrid odor and gingerly waded my way through the mire to reach those frightened fowl.

When the rescue was complete, I stood still, stunned and miffed. My ears were red and ringing from wings flapping in my face. I sputtered feathers from my mouth. They were not very grateful.

At that moment, calm fell over the pen and the pigs decided they would indulge their curiosity of me. I instantly lost my bravado and quickly squelched my retreat to the trough intending to hurl myself to safety. As I stepped onto the trough---I slipped. I fell backward, full length, flailing and wailing as I went. I could hear the back-up vocals of five frightened pigs joining my chorus.

If I thought my mother would be sympathetic –I was to be disappointed. Not only did I not get praise or comfort for my heroic misadventure, I was requested to remove my odorous clothing in the porch. I complied with the dignity of a true heroine. Holding my manure plastered head high --my chin slightly quivering; I walked gracefully through the kitchen to the bathtub, which was not billowing high with scented bubbles.

I was quite content from then on to find my own amusement. I’d had quite enough of my mother’s mildewing.